Hey guys! Here I am doing another TikTok challenge. Sorry guys but I am obsessed with the app and find it so fun. This challenge was to create a look starting from the 1950s to the 2000s. I thought it would be fair to share the results and also explain some of the thoughts when creating the looks.

I feel like this is something my grandmother would wear. I even put on her pearls for the photos!

1950s makeup is a combination of light and natural and heavily applied makeup. The eyebrows and base makeup are both very light, with just a little blush. The eyes are just lined on the top with black and a heavy coat of mascara is applied. During the day most women would wear nudes or pinks, but I decided to go for a glam red.

It’s hard to tell in the photo but I tried to do a little swirl with my hair. 1950s hair is generally pretty complicated. I had only three bobby pins so I was limited to what I could do. I finished the look with a basic black collared shirt. 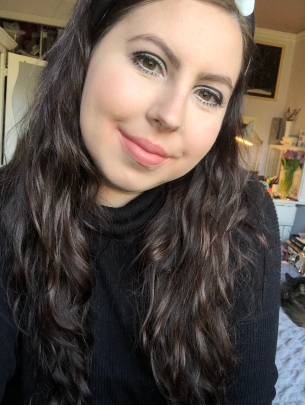 When I showed my mom the final look, she said I reminded her of my great-aunt. She said all I was missing was blue eyeshadow haha!

There were many different makeup trends, but I decided to go for a mod look because it’s the most dramatic. The eyebrows are probably the only not over the top part of the look. The base is extremely matte and powdered, and generally a share lighter than your natural skin tone. The eyes in the focal point of the look. A line is drawn above the crease and the lid is either white or blue. False lashes are optional but common. The waterline is usually white. On the bottom of the eyes are fake lashes drawn in with eyeliner. The look is completed with a very pale lip.

I decided to complete the look with a polka dot headband and a turtle neck.

My mom was a tween/teen in the 1970s, and this is a look she would rock. The 1970s was a decade of social activism and with that many women embraced a more natural face after the heavy makeup of the previous decade.

The eyebrows were big and bushy. I kept my base very light and applied a peachy blush. I added some faux freckles because I felt like it added to the natural look. I added a bit of mascara and a lip balm and I was done.

Now I would have loved to do a Farrah Fawcett style hair but there was no way I would be able to pull that off. So I went with straight hair because it was popular to have long straight hair. I finished this look with a crochet knit top that was my mom’s and vintage. My mother’s chest was way smaller than mine and probably fit her better though haha. 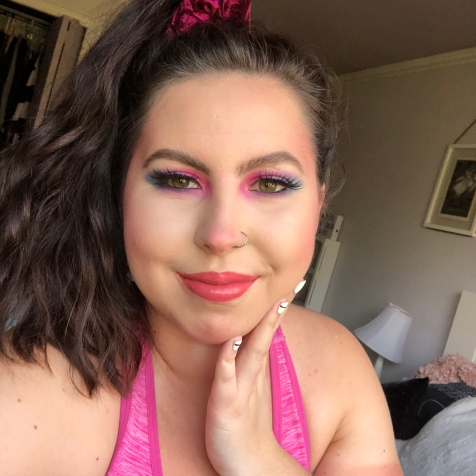 When I showed my mom my look, she said I needed to add more blush haha!

Makeup in the 1980s was big, bold and bright. Big brows continued from the 1970s. Purple, blue and pink were some of the favourite eyeshadow colours, so I added all three to my lid. Big false lashes were also common, so I applied my biggest pair. Blush was applied with a heavy hand to the cheeks, temples, nose and chin. I finished the look with a pink lip. I would have loved a neon fuchsia, but I don’t own any.

I finished my look with a pink sports bra and a high pony in a scrunchie. My mom was super into exercising  in the 1980s and was an aerobics instructor, so this felt appropriate to my lineage. 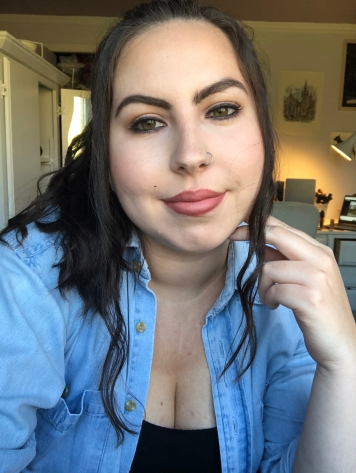 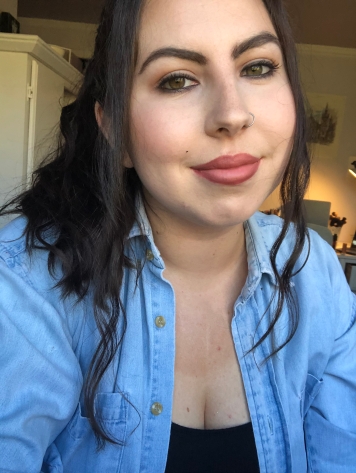 If I was a teen in the 1990s I feel like I would be in the grunge scene. When I was a teen I often wore oversized jean or plaid shirts. I loved dark floral and was getting more and more into rock music. So it only made sense that I did a grunge look for the 90s.

Thin eyebrows were huge in the 90s, but I wasn’t going to sacrifice my brows for this photo ahaha. I made them super dark and almost look like they were pencil-ed on. Dark eye makeup with lots of black eyeliner was popular with the grunge look. There was two popular lip looks in the 90s. The first was dark browns or reds and the other is lining your lips in a different shade than the lipstick. So I combined the two with a brown lip liner and a nude lipstick.

I finished the look with a vintage jean shirt I own. Having front pieces hang out from a ponytail is a look that was common in the 90s and is currently making a comeback. I like this 90s look might be my favourite. 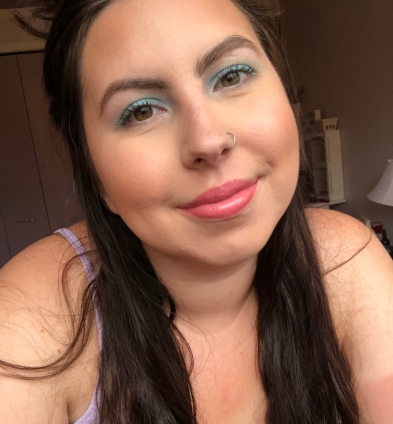 I was a kid/tween in the 2000s, so this makeup is what I saw on tv. Some of my first makeup products were lip gloss and sparkly blush.

Blue sparkly eyeshadow started in the 90s and continued into the 2000s. Eyebrows were also thin, but I’m not messing with my brows for this post. The base was usually very tan sometimes orange looking. Lots of bronzer and blush was applied. And no 2000s look was complete without lipgloss.

Light pinks and purples were popular colours, so I threw on this purple top. 2000s hair was crazy. I was inspired by the great Lizzie McGuire to do this clip with hair sticking out.

And those are all my looks. I hope you enjoyed this, I had so much fun doing in. Let me know if there are any other challenges you think I should try out.